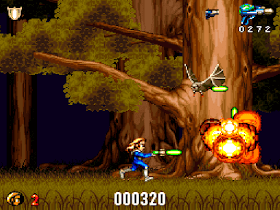 Genre: Action
Perspective: Side view
Gameplay: Platform, Shooter
Setting: Post-apocalyptic, Sci-fi / futuristic
Published by: Titus France SA
Developed by: Flair Software Ltd.
Released: 1996
Platform: Super Nintendo (SNES)
This game is a platform shooter set in the future. The player controls a young cyborg named Biomech. Our character runs bravely forward, with only one goal - to destroy as many enemies as possible from his laser weapons and other space age weapons. This game was released at the end of the life of the SNES and despite the rather impressive graphics and sound effects, it looks very slowly in combat. But, all the same, for many, this game will be very attractive fun. Various types of enemies, mythical and magical creatures of the Middle Ages and all sorts of other paranormal creatures are presented. A variety of weapons is also available, which is very important for a good shooter. The combat action is also distinguished by increased complexity, which can scare off an unprepared gamer. One way or another, we have before us a good representative of the shooter genre and will fit for those who want to diversify their impressions with a knightly theme, which is a little felt in this game.
‹
›
Home
View web version