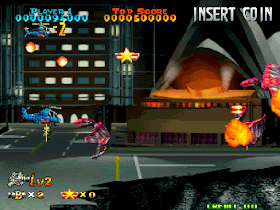 Genre: Action
Perspective: Side view
Gameplay: Arcade, Shooter
Setting: Sci-fi / futuristic
Published by: SNK Corporation
Developed by: Saurus Co, Yumekobo Co.
Released: 1999
Platform: Arcade Machine
The beautiful 3D intro makes it easy to understand the plot of this shooting/fly game. Evil beasts of the prehistoric period have fallen upon civilization and destroy everything in their path. You fly one of the two helicopters and save the panicked people while destroying the enemies. Stunning stages are beautifully rendered. The atmosphere of the game is filled with high-level dynamics of events. Helicopter control is very convenient. Each shot is accompanied by colorful special effects. During the passage of the gameplay will be diluted with small tasks. It is entirely up to you how many people will be saved, since you will have to select them yourself. Skillful drawing of levels and objects shows a good three-dimensional view.
‹
›
Home
View web version