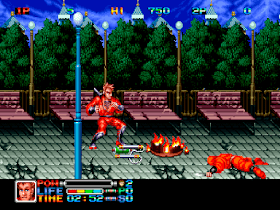 Genre: Action
Perspective: Side view
Visual: 2D scrolling
Art: Anime / Manga
Gameplay: Arcade, Beat 'em up / brawler
Narrative: Martial arts
Published by: SNK Corporation of America
Developed by: Alpha Denshi Kogyo Co.
Released: 1991
Platform: Neo-Geo
This beat'em up is dedicated to ninja wars. One of them you will manage. Initially, your character has only shurikens, which are well wielded. As you progress through the game levels, you can find other weapons. They can also be used. Your ninja can dodge the attacks of opponents, effectively performing somersaults. It is also possible to use a special move that knocks down a significant number of enemies. The graphics of the game does not indulge in beautiful textures and amazing effects. A variety of project atmosphere is given by various objects at stages that can be broken.
‹
›
Home
View web version