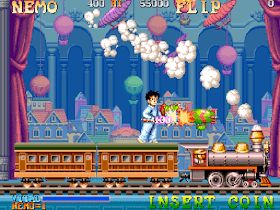 Genre: Action
Perspective: Side view
Visual: 2D scrolling
Gameplay: Platform
Published by: Capcom Co.
Developed by: Capcom Co.
Released: 1990
Platform: Arcade Machine
This is a kind of platform game in which you play the role of a little boy Nemo, namely, you have to travel into his dreams. On the way, you will meet bizarre creatures that a small child could only invent. The stages are also made in the same vein: you can ride a toy train, visit a toy factory, run through the skies and all that. In general, the game is designed for a children's audience, but will not leave indifferent the average player, because. there is still a drop of complexity here, and the game is pretty funny.
‹
›
Home
View web version