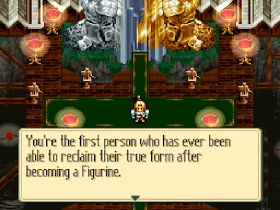 Genre: Role-playing (RPG)
Perspective: Diagonal-down
Art: Anime / Manga
Pacing: Turn-based
Setting: Fantasy
Published by: Enix Corporation
Developed by: Produce Co.
Released: 1995
Platform: Super Nintendo (SNES)
Mystic Ark is another game from Produce! taking place in the same world as The 7th Saga and Brain Lord. It is a classic jRPG, with minor exceptions - for example, in terms of the combat process.
So, at the very beginning you will have to choose a hero or heroine - Lemele or Fellis. They are no different from each other (even the model's sprite is almost identical), but they can learn different magic. Most of Lemele's skills are fire, but Fellis leans more towards white magic.
Lemele or Fellis wakes up in a certain temple on an unknown island, which is essentially a crossroads of worlds - and in order to return home, you will have to help him or her collect some "ark" in order to restore the passage to the last room in the temple.
Each world you go to is unique. In it you will meet friends - the witch Miriene, the fighter Reeshina, Lux the tetsujin, Kamio the ogre, the novice Mesia and the ninja Tokio. All of them will try to help you complete the task, which, to put it mildly, is not easy.
The combat system is interesting in that it limits the player to three characters (usually at least one more) and uses a "from the back" view. Otherwise, it's still the same turn-based combat system - enemies and you take turns using abilities that consume MP and try to lower your opponents' HP to zero.
It is worth noting the elaboration of each character - all their abilities are really unique and there are enough combinations with them.
Separately, it is worth noting the design of the enemies (and the design in general) - the designers clearly did their best, the enemies look unusual and interesting, and besides, there are almost no diseases of many RPGs - repainted enemies. Towards the end, the design of enemies and bosses even begins to give off Lovecraftian motifs ...
But it will be all ahead, but for now - sword in hand, and forward, in search of a way home!
‹
›
Home
View web version