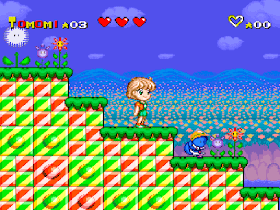 Genre: Action
Perspective: Anime / Manga
Gameplay: Platform
Setting: Fantasy
Published by: TAKARA Co.
Developed by: Now Production Co.
Released: 1993
Platform: Super Nintendo (SNES)
Charming platformer. Juicy, pleasing to the eye picture. Friends Tomomi and Mikami, along with their class, ended up in some fabulous place. Now they need to find their favorite teacher and classmates. There are candies as a weapon, by feeding them to a creature, you can use it as a platform. Bosses will have to be defeated in different mini-games. Toward the end, the game becomes quite difficult and will require good memory and reaction from you.
‹
›
Home
View web version