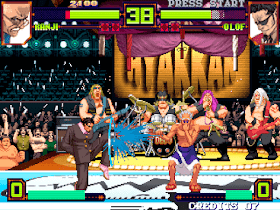 Genre: Action
Perspective: Side view
Gameplay: Arcade, Fighting
Published by: Playmore Corporation
Developed by: Noise Factory
Released: 2003
Platform: Neo-Geo
There are fifteen fighters to choose from in this fighting game. Each has its own fighting style and techniques. The graphics are pretty well drawn. The dynamics of the game is combined with convenient controls. All stages are very well worked out and distract with their beauty. During the fight, you can even be and use the judge walking next to you as a fight with the opponent. It looks pretty original. Great soundtracks literally merge with the game.
‹
›
Home
View web version