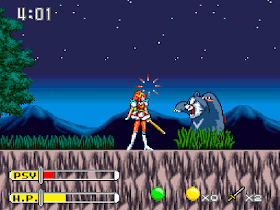 Genre: Action
Perspective: Side view
Visual: 2D scrolling
Gameplay: Arcade, Beat 'em up / brawler, Platform
Published by: SETA U.S.A.
Developed by: Affect Co.
Released: 1993
Platform: Super Nintendo (SNES)
Josephine is a teenage girl who enrolled in a kendo school to learn how to use the martial art effectively. Her teacher teaches her students not only how to swing bamboo swords, but also additional possibilities of psychic power so that they can effectively resist not only the forces of all sorts of maniacs, but also various creatures that lie beyond the bounds of human consciousness. It was Josephine who was entrusted with a powerful artifact that would transform her from a normal teenager into a powerful warrior. So she runs through different levels with her bamboo sword, and bestows evil spirits not only with good blows with her stick, but also with psychic focus, which are converted into powerful projectiles. Josephine can also summon something like a murderous fog that takes away some of her health. The game is divided into seven levels with bosses in each stage. A standard Japanese game with all the appropriate humor and a long-legged heroine in a miniskirt. The madness that is happening on the screen is not very controllable, and it is difficult to describe it.
‹
›
Home
View web version