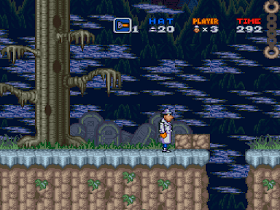 Genre: Action
Perspective: Side view
Visual: 2D scrolling
Gameplay: Platform
Published by: Hudson Soft USA
Developed by: AIM
Released: 1993
Platform: Super Nintendo (SNES)
We've all heard of the Inspector Gadget, right!? This is a guy who often gets self-destructing messages and gives them to his boss, and they, as a result, blow up his face. At least that's how it was in the animated series. He is also stuffed with various robotic things. In this game, we get the opportunity to take control of Inspector Gadget, go along with him a dangerous path through six locations and defeat Doctor Claw, who kidnapped a girl named Penny. All kinds of units in the form of a propeller in the head or elongated arms and legs will help Gadget overcome the highest ledges, the most deadly abysses. Not without enemies, of course. The graphics look good. All backgrounds are very colorful. The music perfectly matches the area in which our hero is located. Good game for one player.
‹
›
Home
View web version