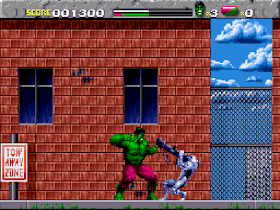 Genre: Action
Perspective: Side view
Visual: 2D scrolling
Gameplay: Platform
Setting: Sci-fi / futuristic
Published by: U.S. Gold Ltd.
Developed by: Probe Entertainment Ltd.
Released: 1994
Platforms: Super Nintendo (SNES), SEGA Genesis / Mega Drive, SEGA Master System
Marvel superhero game. This time, the Invincible Hulk appeared before us, although here he does not look so invincible. What a giant mutant can use as a weapon, of course, is only his most powerful muscular arms and fists. There is also a super clap in the Hulk's hands - in the animated series, he also indulged in such. The game has the ability to turn into a person, but there is no particular benefit from this implementation. In human form, the Hulk can use a pistol, but at the first raid, it’s still better to turn back into a huge, powerful green carcass so that the enemies don’t become so impudent. The game does not particularly carry anything outstanding, but there is nothing particularly bad in it either. Fans of this hero may still like her. Well, for those who still think that the Hulk game should be better, Marvel Super Heroes is still recommended for SNES, which also features this green monster with a more menacing look.
‹
›
Home
View web version