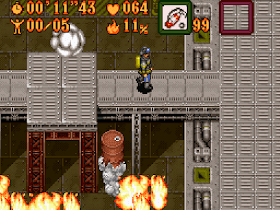 Genre: Action, Puzzle
Perspective: Top-down
Gameplay: Arcade
Published by: Jaleco USA
Developed by: Jaleco Ltd.
Released: 1995
Platform: Super Nintendo (SNES)
An amazing game from Jaleco, creator of the Rushing Beat trilogy on this system. Despite the fact that the game has been out for a long time, it can still bring you a lot of fun. The gameplay is to put out fires. Before each level, you are informed about the goal, and you are given the opportunity to select equipment for the next mission. This is a very important aspect, and a very deep one, as you will have to weigh the pros and cons of each tool. You can take two types of fire extinguishers from the three available. And there are different types of fires. They are discussed during the briefing. Based on this awareness, you will have to choose what else to take with you. For example, if you choose an ax to open doors and break windows!? But what about a rope that helps to get to hard-to-reach places where there may be victims!? The paradoxical choice is yours, and this is just the first of many difficult decisions to be made in the game. There is an amazing level of freedom here! It is very pleasing that Jaleco decided to keep realistic features in their product. They have worked hard and gone to great lengths to ensure that the game has a solid foundation of believability. As you progress through your choice of further actions will be more and more difficult. Management is implemented as flawlessly as everything else. All movements are logical and intuitive. Just one second of delay due to careless management can mean the difference between success and failure. The graphics do their job well. Everything in the game looks harmonious and not too spectacular, with the exception of poisonous gases used in one of the later levels. The game's audio is fantastic and, like the graphics, follows the "less polished, but as atmospheric as possible" approach. A very original approach to this case. The devouring sounds of fire are realistic and terrifying. Voice effects accompanying various characters and especially the victims will help to perfectly get used to everything that happens. The clanging of boots as you walk down the metal catwalk is so realistic that you will admire the game over and over again. Fire extinguisher sounds are also implemented. Even the sound effect used when opening the doors adds to the effect. The music suits the levels perfectly. It has a slow rhythm at first, but as it progresses, the intensity increases and the tempo increases tenfold. The blood boils and you fall into the game even more. You know that you must save the life of every person caught in this fiery trap, and the music does not let you forget about it. It really adds a level of immersion to the game. If you don't like this product on first impressions, then you have no one to blame but yourself. The Ignition Factor is one of the most unique implementations on the Super Nintendo. The game gives a lot of fun, as well as addictive gameplay and incomparable sensations.
‹
›
Home
View web version