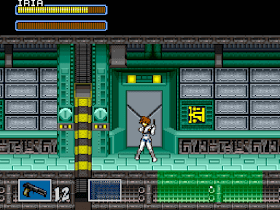 Genre: Action
Perspective: Side view
Art: Anime / Manga
Gameplay: Platform, Shooter
Setting: Sci-fi / futuristic
Published by: Banpresto Co.
Developed by: TamTam Co.
Released: 1995
Platform: Super Nintendo (SNES)
Action based on the Japanese anime series "Iria: Zeiram the Animation". In the role of the bounty hunter Iria, you fight against the indestructible alien monster Zeiram and a crowd of his "friends". The game has labyrinthine levels, where the transmitter assistant will tell you the right way. But sometimes it is useful to deviate from the route, ignoring the hints - you can find useful prizes. There is an emphasis on tactics: the killed enemies do not reappear, in order to successfully fight them, you need to look for the right approaches and you need to use your weapons competently and economically. If possible, it is better to deal with the enemy hand-to-hand, saving ammo. Between levels, you can buy new weapons, different types of grenades and bombs, as well as useful tools. Sometimes you need to fly to shoot. Nice atmospheric music.
‹
›
Home
View web version