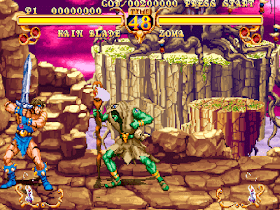 Genre: Action
Perspective: Side view
Visual: 2D scrolling
Gameplay: Fighting
Setting: Fantasy
Published by: SEGA Enterprises Ltd.
Developed by: Sega AM1 R&D Division
Released: 1994
Platforms: Arcade Machine, SEGA Saturn
Many years have passed since the last war with the Death Bringer. But as memories of those dark times began to fade, another war broke out. Out of the mists of time, the magical Axe is discovered. The legend of the Axe is well known throughout the world, for it says that it is the same Axe used by Gilius Thunderhead to kill the Death Bringer. Over time, Axe's powers have grown. It is said that the artifact can grant its owner all their heart's desires. Young and old, good and evil, many are drawn to the power of arms. Thus begins the Golden Axe war.
‹
›
Home
View web version