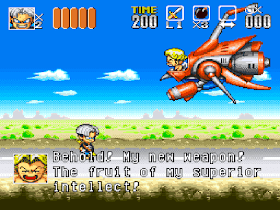 Genre: Action
Perspective: Side view
Art: Anime / Manga
Gameplay: Platform
Setting: Fantasy, Sci-fi / futuristic
Published by: Banpresto Co.
Developed by: Aspect Co.
Released: 1995
Platform: Super Nintendo (SNES)
The final part of the devil's adventures. This time, you can also play as the character's main rival, a sweet little angel who has been trying to make life harder for the hero throughout the series. In connection with the emergence of new enemies, they will have to join forces to fight them. In addition to the usual levels of an ordinary platformer, there are other fun stages here that are just great. The graphics are still implemented in a colorful cartoonish cheerful style. The sound is good enough, at least there is no desire to turn it off. This game is suitable not only for fans of the manga of the same name by Akira Toriyama, but also for all lovers of fun games and quality platformers. A series for those who want to smile, as she is really good at this task.
‹
›
Home
View web version