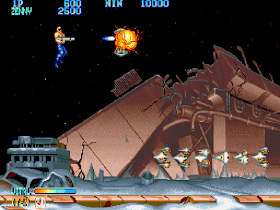 Genre: Action
Perspective: Side view
Visual: 2D scrolling
Gameplay: Arcade, Shooter
Setting: Sci-fi / futuristic
Published by: Capcom Co.
Developed by: Capcom Co.
Released: 1988
Platform: Arcade Machine
The game is made in the fly / shoot genre, where you play the role of a brave space marine in blue pants, something similar to the characters from Contra on Nes, in principle, and the gameplay is also not too different. You fly only in one direction (to the right), sometimes up, and shoot from your machine gun everything that tries to get close to you, along the way running into a shop for shopping, where you are offered extra lives, equipment and an addition to the machine gun (and each time is different ), just pay the money you get from killed enemies. There are plenty of enemies in the game, the number of which is constantly growing from level to level. The bosses are 2 times bigger than the main character and it is not so easy to deal with them, so stock up on coins, but more, and shoot from all the guns.
‹
›
Home
View web version