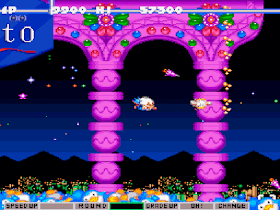 Genre: Action
Perspective: Side view
Visual: 2D scrolling
Art: Anime / Manga
Gameplay: Arcade, Shooter
Narrative: Comedy
Published by: Konami Co.
Developed by: Konami Co.
Released: 1994
Platform: Super Nintendo (SNES)
A very peculiar shooter from Konami. It is even difficult to accept his concept. Some crazy characters with ambiguous enemies, weird giant bosses and anime style women. This is the second game in the series and is a parody of the Gradius series of games. The graphics really look amazing. It is pleasing to the eye and some of the things seen during the game make you smile. Everything looks very original. To understand this, it is enough to mention the bosses, such as the giant mermaid and the 50-foot woman. It even has a selection of characters that is unique in itself! Some of them are strange, some are cute, and others are just unthinkable and fit well enough for this game. For example, a red octopus with a mustache, a flying pig, a cute girl with bunny ears, who is sitting on a rocket in blue tights. And now let's get acquainted with some of the enemies: rockets, small boats, birds, chickens, ice cream, milkshakes and fish. This is a crazy line, and not the whole list. Everything here is just crazy! And they love this game! Fun, fun, fun... That's what makes this toy repeat. Whether you're a fan of quality flying shooters, or just want to try something a little silly, Gokujou Parodius is definitely for you. However, if you only recognize real and serious gaming, I would recommend staying away from this product. Everyone else, welcome aboard!
‹
›
Home
View web version