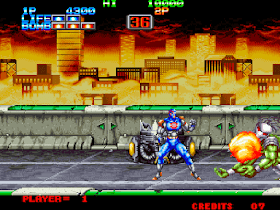 Genre: Action
Perspective: Side view
Visual: 2D scrolling
Gameplay: Beat 'em up / brawler
Published by: SNK Corporation of America
Developed by: Pallas
Released: 1991
Platform: Neo-Geo
The meaning of the game is very simple - monsters attacked the city, and a brave man in a jacket turns into a "Eightman", with the figure eight, in fact, he has nothing in common except for a large sign on his chest. For a good beat'em up! the game does not pull - there are no captures or tricks, only "bombs" and "waves" emitted by the limbs of the hero. And so the bad impression is spoiled by the "heroic" music, which hurts the ear. The game is hardly worthy of more than passing the first level.
‹
›
Home
View web version