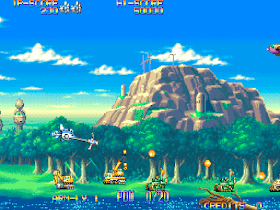 Genre: Action
Perspective: Side view
Visual: 2D scrolling
Gameplay: Arcade, Shooter
Published by: Capcom Co.
Developed by: Capcom Co.
Released: 1994
Platform: Arcade Machine
This is a side-scrolling shoot-em-up with an environmental theme, as the name implies, where you have to fight against a mega corporation that pollutes the Earth. The game is made according to all the canons of the above genre, although it has one rather interesting feature, it lies in your main weapon, which looks like a cannon that can rotate 360 degrees, you can still use it as a sledgehammer to clear the path. The game with its innovation looks quite interesting, it has where to use your brains, and not just shoot from all the guns. In addition, the game looks quite impressive, the background is just on top.
‹
›
Home
View web version