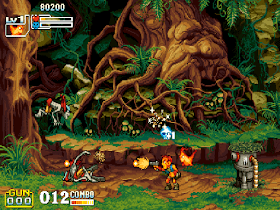 Genre: Action
Perspective: Side view
Visual: 2D scrolling
Gameplay: Shooter
Setting: Sci-fi / futuristic
Published by: International Games System Co.
Developed by: International Games System Co.
Released: 2002
Platform: Arcade Machine
Unlike the "big brother" - the Metal Slug series, Demon Front's conditions are transferred from World War II to modern conditions. To turn the tide of the war in their favor, the enemy decides to use a powerful demon as a weapon of mass destruction. A detachment of special forces plunges into other dimensions, in which hordes of infernal creatures block the path to the body parts of the once defeated demon. The game will delight you with an RPG-like leveling system, the ability to use small ghostly helper creatures for attack and defense, a choice of dimensions and a special psychedelic-fantasy atmosphere.
‹
›
Home
View web version