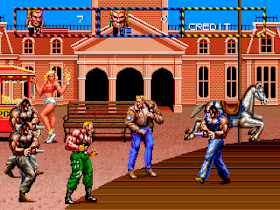 Genre: Action
Perspective: Side view
Visual: 2D scrolling
Gameplay: Beat 'em up / brawler
Published by: SEGA Enterprises Ltd.
Developed by: Sega AM3 R&D Division
Released: 1991
Platform: Arcade Machine
D.D. Crew is a little-known beat 'em up released by Sega for arcade machines. Playing as a unit of the LAPD (up to 4 playable heroes based on celebrities), you must take down a huge gang with seven bosses in order to neutralize the threat of a terrorist attack. Here you can see a good variety of combat options for the genre - for example, you can pick up the fallen and throw them away or beat the rest of those present with them, but the whole process is rather monotonous and drawn out, which makes the game objectively boring already by 2/3 of the passage.
‹
›
Home
View web version