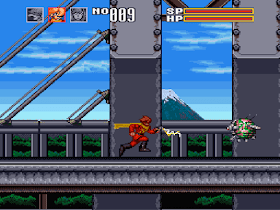 Genre: Action
Perspective: Side view
Art: Anime / Manga
Gameplay: Platform
Published by: Toei Animation Co.
Developed by: BEC Co.
Released: 1994
Platform: Super Nintendo (SNES)
The attention of anime fans is invited to the game incarnation of the legendary 1964 manga "Cyborg 009" by Ishinomori Shotaro, which has been the leader of popularity in the Land of the Rising Sun for 40 years now. An unfamiliar place, a strange laboratory... A young guy hardly comes to his senses.... He does not know where he is and where he comes from. He doesn't remember who he is. He doesn't even remember his own name. And the only thing he will soon find out is that now he is a cyborg endowed with extraordinary abilities and that he is not alone .... The plot tells us the story of a Japanese cyborg who becomes a new member of a special team of other cyborgs to fight evil, which sows the organization Black Ghost. The graphics and character designs perfectly convey the manga adaptation and several seasons of the anime series. The game is made at a decent level. Before the combat exit, we select three characters and go into battle. During the game, you can switch between the selected heroes at any time. Each of them has their own unique abilities. Very high quality product, recommended to all anime fans. Game for one player.
‹
›
Home
View web version