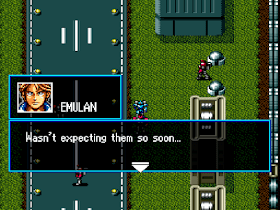 Genre: Role-playing (RPG)
Perspective: 3rd-person, Top-down
Art: Anime / Manga
Pacing: Turn-based
Setting: Sci-fi / futuristic
Published by: Tonkinhouse
Developed by: Atelier Double Co.
Released: 1994
Platform: Super Nintendo (SNES)
The spacecraft crew returned to Earth. They were not welcomed cordially: extraterrestrial technologies were confiscated, and the crew was imprisoned. And now the government of the planet is trying to use alien devices to capture other galaxies. Your characters fight in modules similar to the robots from the Gundam anime. Battles take place in a 6v5 grid. Before each round, you equip modules and give them orders, then the battles go automatically. You can fight both with weapons and in close combat. Trophies appear after battles and in the laboratory where new weapons are being developed. The picture in the battles is very good, because it uses large and detailed sprites.
‹
›
Home
View web version