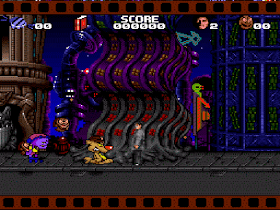 Genre: Action
Perspective: Side view
Visual: 2D scrolling
Gameplay: Platform
Published by: Ocean of America
Developed by: Painting by Numbers
Released: 1992
Platform: Super Nintendo (SNES)
It's an imaginary world, but it's so real. It exists in another dimension where cartoon characters live their own lives. The author of the comic book series, artist Jack Deebs, finds himself in a world he invented. It's a wild and amazing place, but few of the cartoon characters are friendly. Just look at the beautiful and sexy Holli. She is interested in an unexpected visitor from the real world. No, she didn't fall in love with him! She wants to use it to get a real body and leave her cartoonish fantasy world. And she tries in every possible way to realize her motives, even if the parallel world and the one where Jack came from suffer from this. As Jack you must stop her by solving all sorts of puzzles. The game is based on the cult film by Ralph Bakshi, in which Brad Pitt, Gabriel Byrne, and the beautiful Kim Basinger played.
‹
›
Home
View web version