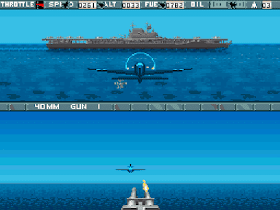 Genre: Action, Simulation
Perspective: Behind view
Gameplay: Arcade
Vehicular: Flight / aviation
Setting: Historical events, World War II
Published by: Cybersoft
Developed by: Synergistic Software
Released: 1995
Platform: Super Nintendo (SNES)
A very interesting military simulator of flights on planes of the Second World War. The game has a bias in both strategy and tactics, so I think many fans of these genres will like the game. Two opposing sides are represented - the United States and Japan. At the first stages of preparation for battle, we are given the opportunity to build a pyramid of aircraft, and think about what kind of aircraft will take a certain place in this figure for an effective battle with the opponent's forces. Then we control the combat unit and try to shoot down the enemy. The action of the aircraft is very diverse. For example, in one case, it is necessary to maneuver effectively, try to take the enemy at gunpoint and shoot him, in the other, control the cannon, trying to brush off the tail of the pursuing opponent. In general, the game will not let you get bored, everything is implemented quite interestingly. There is a workout mode. Landing on an aircraft carrier is also available. Graphic and sound effects are quite good. I hope fans of all sorts of war games will be satisfied.
‹
›
Home
View web version