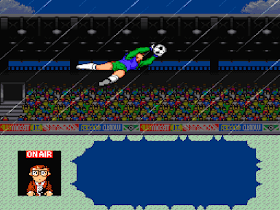 Genre: Role-playing (RPG), Sports
Perspective: Diagonal-down
Gameplay: RPG elements
Interface: Menu structures
Setting: Football (European) / Soccer
Published by: Tecmo
Developed by: Tecmo
Released: 1993
Platform: Super Nintendo (SNES)
Continuation of the game about a man passionately dreaming of becoming the greatest football player in the world. Again, you have to help him with this. All sorts of effects, super blows are also present. In the most suitable and unexpected situations, we give commands to the players, and in the case of effective decisions, we get to the goal and drive the ball into the net with a spectacular shot. The series was popular and, despite the fact that it was released only in Japanese, almost everyone knows this game. Game for 1-2 players.
‹
›
Home
View web version