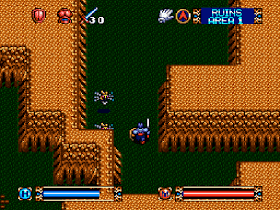 Genre: Action, Role-playing (RPG)
Perspective: Top-down
Setting: Fantasy
Published by: KOEI Co.
Developed by: Nihon Falcom Corp.
Released: 1995
Platform: Super Nintendo (SNES)
Virk was charged with a murder he didn't commit. By chance, he subsequently falls into the dungeon. Now you have to defeat all sorts of enemies and solve many puzzles to return to the surface. The game has a somewhat awkward and clumsy interface. So it will take some time to get used to it. The most patient players will be able to plunge into a rather interesting adventure. Spells in the game give a great advantage in combat, and most interestingly, they allow you to teleport throughout the dungeon. Attacks are easy to figure out. Here you will also have to purchase weapons, items or magic. The graphics in the game are not particularly pleasing, but the music is in a much better position. Although it is not so much, but it fits perfectly into the overall aura of the game. In Brandish, you don't have to waste time on all sorts of conversations with other characters, all your action will take place in a dark and gloomy corridor. You can say this game is the opposite of all kinds of other RPGs. You will be constantly under the threat of death, which can take you by surprise at the most unexpected moment. For the first time, this project did away with the qualities that have already taken root in many RPGs, developing their ideas. A very bold project that evokes mixed feelings. The game is damn hard! Of course, many did not like this implementation, but anyway, try it suddenly you are not one of them. A very worthy and bold project, characterized by good originality.
‹
›
Home
View web version