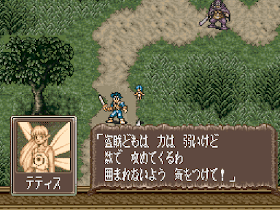 Genre: Strategy
Perspective: Top-down
Pacing: Turn-based
Gameplay: Tactical RPG, Turn-based strategy
Published by: Pioneer LDC
Developed by: ITL
Released: 1995
Platform: Super Nintendo (SNES)
The story of this game starts among the islands of Europea. One of them, Avalon, is famous for the fact that the ultimate weapon, which was called the Machine of God, rests there. Only those who possess the 12 rings of power can access this weapon and use it for their own purposes. And so your story begins with the discovery of one of the twelve rings ... The gameplay of the game is very exciting, which combines elements of RPG and strategy. The game has many different spells that are endowed with different characters. Some of them can fly, teleport and attack from great distances. The game world is very diverse. In the process of passing you can meet both formidable bosses and noble allies. Some scenes make the heart flutter and admire this game more than once. The game has a unique graphical style. The sprites and animations look just great. Separately, it is worth highlighting the musical implementation, some melodies remain in the head for a long time. Even without knowing the Japanese language, the game lends itself to learning and passing.
‹
›
Home
View web version