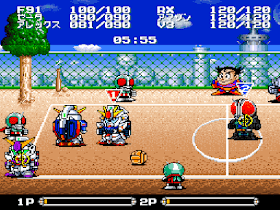 Genre: Sports
Perspective: Diagonal-down
Visual: 2D scrolling
Sport: Dodgeball
Published by: Banpresto
Developed by: Banpresto
Released: 1991
Platform: Super Nintendo (SNES)
Very funny Japanese game. It looks like basketball, only in the role of a ball we have a stone that needs to be thrown at a malicious opponent! And in the role of players are small funny robots. The graphics are not very good, but there is a team choice and a choice of arena. Each arena has its own specifics.
‹
›
Home
View web version