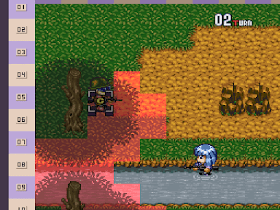 Genre: Strategy
Perspective: Diagonal-down
Pacing: Turn-based
Gameplay: Tactical RPG, Turn-based strategy
Published by: Betop
Developed by: I'Max
Released: 1995
Platform: Super Nintendo (SNES)
A good representative of tactical games. Despite the fact that this implementation is in Japanese, it is quite amenable to study and mastering. You have to create your own rapid response team of several combat units and send them on sorties against the enemy. There are characters with different skills, such as snipers, sappers, etc. The whole process, as already established in various tactical representatives, takes place in a step-by-step mode. Your team, under your strict guidance, will have to go through many missions and come out victorious in them. Be sure to succeed in this tactical epic, the squad needs a strong and skillful commander with good strategist qualities.
‹
›
Home
View web version