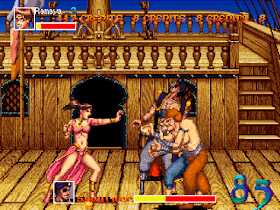 Genre: Action
Perspective: Side view
Visual: 2D scrolling
Gameplay: Beat 'em up / brawler
Setting: Fantasy
Published by: SEGA Enterprises Ltd.
Developed by: SEGA-AM2 Co.
Released: 1992
Platform: Arcade Machine
The game is made in the style of a classic beat 'em up on the theme of an Arabian fairy tale, where you have to save the princess. There are 4 characters to choose from: Sinbat, Ramaya, Goldor and Datta. Co-op is available for up to four players. The game was released exclusively for arcade machines.
‹
›
Home
View web version