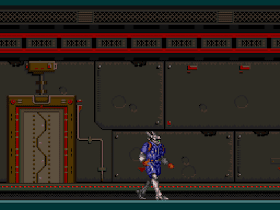 Genre: Action
Perspective: Side view
Visual: 2D scrolling
Art: Anime / Manga
Gameplay: Platform, Shooter
Setting: Cyberpunk / dark sci-fi
Published by: Visit Co.
Developed by: KAN's Co.
Released: 1994
Platform: Super Nintendo (SNES)
Game based on the anime movie "AppleSeed". This is where the positive description ends. Before the level, choose a weapon for yourself in support of the pistol and grenades already in your arsenal. Then you move forward rather boringly, eliminating crowds of small green soldiers compared to you, who sometimes even feel sorry for. There was no health bar. The imminent destruction is symbolized by the redness of your cyborg. Appleseed looks like some kind of 8-bit ... In a small plus of the game, you can record plot inserts between levels, but nothing more. There are better shooting games on the SNES than this one.
‹
›
Home
View web version