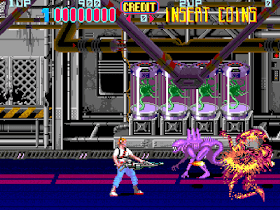 Genre: Action
Perspective: Behind view, Side view
Visual: 2D scrolling
Setting: Sci-fi / futuristic
Published by: Konami Industry Co.
Developed by: Konami Industry Co.
Released: 1990
Platform: Arcade Machine
An arcade shooter based on the cult action movie of 1986 with minor additions by the developers. You, in the role of Ellen Ripley or Corporal Hicks, must explore the abandoned space settlement LV426 "Acheron" and destroy the countless hordes of Aliens that have infected this place. In addition to the standard automatic rifle, there are additional weapons such as a flamethrower, rocket launcher and grenade launcher. What's more, the Caterpillar P-5000 walking loader can also be found and used in combat. At times, the perspective changes in a manner similar to Contra, when you shoot not along, but, as it were, deep into the screen. There are also rail-shooter levels astride an armored vehicle.
‹
›
Home
View web version