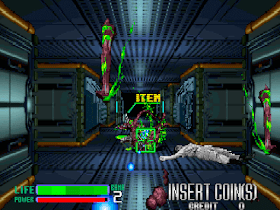 Genre: Action
Perspective: 1st-person
Gameplay: Arcade, Rail shooter
Setting: Sci-fi / futuristic
Narrative: Horror
Published by: SEGA Enterprises Ltd.
Developed by: Sega AM1 R&D Division
Released: 1993
Platform: Arcade Machine
A virtual shooting range based on the plot of the movie Alien 3. The game has 6 levels, at the end of each there is a boss, and the entire sixth level consists of the final battle. Between levels, we are shown a map, frames from the film and a text description of what is happening. From weapons we have a machine gun, grenades and a flamethrower, you can also collect pills to restore health.
‹
›
Home
View web version