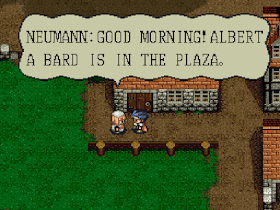 Genre: Role-playing (RPG), Strategy
Perspective: Top-down
Pacing: Turn-based
Gameplay: Tactical RPG
Setting: Fantasy
Published by: Sun Electronics Corp.
Developed by: Tokai Engineering
Released: 1993
Platform: Super Nintendo (SNES)
This game can be recommended to those who love tactical RPGs. This is a very high quality product, but, unfortunately, not widely used. The game was only released in Japan. Again the forces of evil threaten the lands. But good does not sleep and is ready to fight back at the right moment. The graphics and sound are reminiscent of Legend of Zelda - A Link to the Past also on this system. That is, in other words, all the important components of the game are implemented at a very good level. Sprites for many characters and monsters are very well done. Attacks and magic are also pleasing to the eye.
‹
›
Home
View web version