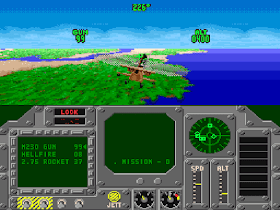 Genre: Action
Perspective: Behind view
Gameplay: Shooter
Vehicular: Helicopter
Published by: Cybersoft
Developed by: Synergistic Software
Released: 1995
Platform: Super Nintendo (SNES)
If anyone wants to try himself in the role of a combat helicopter pilot, then this game is for you. The action will take place in three different points of military operations. The graphics are pretty good for Snes and the developers have achieved excellent scaling and rotation. The rest of the game does not shine with some good features. You will have to fly combat helicopters of various types and bomb everything that captures your sight. Enemies are also on the alert, and when you appear, they begin to quickly and actively waste their ammunition. The helicopter arsenal is also not infinite, and you will have to worry about this too. You can also try the game in two-player mode.
‹
›
Home
View web version