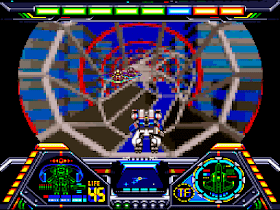 Genre: Action
Perspective: Behind view
Gameplay: Arcade, Shooter
Vehicular: Mecha / giant robot
Setting: Sci-fi / futuristic
Published by: Tomy Company
Developed by: Genki Co.
Released: 1993
Platform: Super Nintendo (SNES)
Everyone knows the Japanese love for huge robots. In this, in essence, a racing game, a transformer robot acts as a car. Before the race, the robot must be equipped with weapons. The indicator in the lower right corner clearly demonstrates the characteristics of the selected weapon. After hanging the robot with guns, it is released onto the track. It looks more like a pipe than a standard gray canvas. Moreover, our enemies fly in abundance on the track, which are proposed to be destroyed with guns. The robot can change shape, but only temporarily. The game is quite interesting and you can spend some free time behind it.
‹
›
Home
View web version