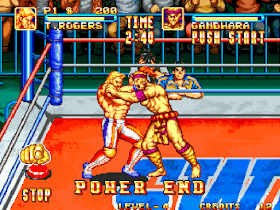 Genre: Action, Sports
Perspective: Side view
Visual: 2D scrolling
Gameplay: Fighting
Sport: Wrestling
Published by: SNK of America
Developed by: SNK Corporation
Released: 1993
Platform: Neo-Geo
The fighting game is pretty average. The figures are large, the tricks look convincing. Despite this, the character design leaves a lot to be desired. The disadvantages also include a small variety of arenas (fights always take place in the same ring). Graphically, the characters almost do not differ from each other. In summary, we can say that you should not expect a lot of adrenaline and crazy gameplay from this game. It's amazing if you don't get tired of this game after 3-4 battles.
‹
›
Home
View web version