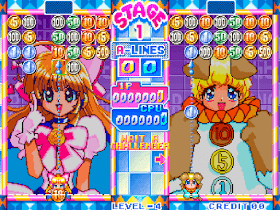 Genre: Action, Puzzle
Perspective: Side view
Visual: Fixed / flip-screen
Art: Anime / Manga
Gameplay: Tile matching puzzle
Interface: Point and select
Published by: FACE
Developed by: FACE
Released: 1997
Platform: Neo-Geo
This is a very complex and original Tetris. There are several game modes here. Each has its own characteristics (a battle alone, a battle with an opponent, and others). You can play as one of several heroines. The essence of the game is to fold identical coins hardly. Correct placement brings points. The game fully captures your attention only when you understand the rules. Here, the musical accompaniment is well chosen, which correlates with the ringing of coins. Bright soft sprites are designed mainly for a young audience. Drawing is made in anime style. The game is quite difficult, since all actions must be done very quickly.
‹
›
Home
View web version