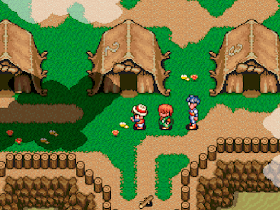 Genre: Adventure
Perspective: Top-down
Visual: 2D scrolling
Art: Anime / Manga
Gameplay: Action RPG
Published by: Nintendo Co.
Developed by: Nintendo R&D2
Released: 1996
Platform: Super Nintendo (SNES)
A game based on Stevenson's book Treasure Island. Under your command will be as many as three scholars, each with its own character and design features. Most of the game will involve solving puzzles and navigating the intricacies of the plot, sometimes being distracted by boss battles and reaction tasks. A fun game with typical Japanese humor. Graphics and music are very good. Difficulties can arise if you rush through the game, so it's best to either be patient and play thoughtfully, or invite your wife or friend with you.
‹
›
Home
View web version