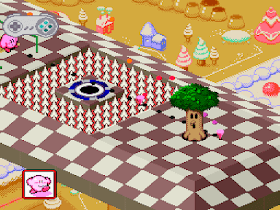 Genre: Sports
Perspective: Diagonal-down
Visual: 2D scrolling, Isometric
Gameplay: Arcade
Sport: Golf
Published by: Nintendo of America Inc.
Developed by: HAL Laboratory, Nintendo EAD
Released: 1995
Platform: Super Nintendo (SNES)
And what has Kirby not done during his career as a video game star! Now it was his turn to play golf. Yes, not just like that, but in saving the heavenly stars stolen by the insidious king Dedede. Golf is also difficult. While the goal is usually to hit the hole, it is necessary to avoid traps, try to hit the opponent with the ball, and Kirby also has the ability to use special skills to hit some enemies. Kirby will have to overcome more than six dozen levels and at the end fight with the king himself.
‹
›
Home
View web version