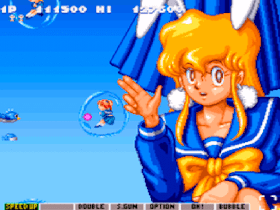 Genre: Action
Perspective: Side view
Art: Anime / Manga
Gameplay: Shooter
Narrative: Comedy
Published by: Konami Co.
Developed by: Konami Co.
Released: 1995
Platform: Super Nintendo (SNES)
Konami's famous flying shooter series that combines mindless, insane, weird design and is fun, that's what makes the game catchy. When you sit down for Parodius for a while, you don't notice that minutes turn into hours, the whole atmosphere is so overwhelmed. What is a game!? Take the Gradius series and parody it! If you are not familiar with the Gradius series, then in terms of gameplay, this is a clear backwardness. Let the weirdness take over and you'll have a lot of fun playing the game. Unique bizarre locations are only half of the wonders that this ROM contains. There are a total of 16 ships on display. Enemies are well detailed and beautifully animated. This is really the kind of game that has few flaws. It is regarded by many as the best shooter of its time. This is an abstract, weird, freaky toy, as far from the norm as it gets. She creates a dream world of just unimaginable, I have no desire to turn off the game.
‹
›
Home
View web version