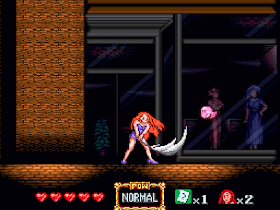 Genre: Action
Perspective: Side view
Art: Anime / Manga
Gameplay: Platform
Setting: Fantasy
Published by: Banalex
Developed by: Natsume Co.
Released: 1993
Platform: Super Nintendo (SNES)
A staunch Japanese girl in an evening dress that shows off her long legs is again on the warpath. The Japanese love such heroines. The game is based on the anime of the 90s and tells us the story of an organization fighting spirits and other manifestations of dark power. Unlike Kendo Rage with another heroine waving a stick, this character is at least somehow manageable, and the balance here is implemented much better. This miracle is played cheerfully, naturally and without any tension. For every meeting with evil spirits, our red-haired beauty dresses up, changes dresses, takes her stick and goes to deliver trouble to all the formidable hellish creatures. The combat performance of the lifesaver can be improved during the game. They will let you ride a cat and fly on a broomstick in the evening sky over the city landscape. As a rule, sound effects genius Hiroyuki Iwatsuki could not create anything but another masterpiece of music. Take for example his tracks from Ninja Warriors, Wild Guns, Pocky & Rocky for this console and many other cult toys. Graphics also do not scare away from the gameplay. In general, not even a bad game, which may have lacked quite a bit before the masterpiece of Japanese classics. Another nice action game from Natsume, which is famous for the high-quality implementation of its games.
‹
›
Home
View web version