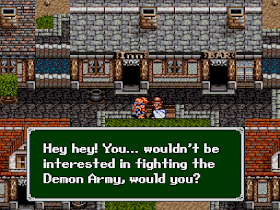 Genre: Role-playing (RPG)
Perspective: Top-down
Art: Anime / Manga
Pacing: Turn-based
Setting: Fantasy
Published by: Media Works Inc.
Developed by: AlfaSystem Co, Glodia
Released: 1995
Platform: Super Nintendo (SNES)
One of the best RPGs on the Super Nintendo, again only released in Japan. However, an English translation already exists, which allows you to fully appreciate this work. The game is known not only on Snes, but also on PC Engine CD and FM Towns systems, each has its own advantages. There is a brief talk about the plot, then we will talk about a man who can turn into a dragon. He lived serenely in his country and did not know anything about people until a ship crashed off its shores, and the only surviving girl fell into his field of vision. They grow up together, later the girl goes back to the human world. The plot will present a lot of events that until the last you will not know who will be the last boss. The characters change very often. Yes, and numerous minor characters die in the process of the whole story. So not everyone will have a happy ending! The musical accompaniment is performed at a very high level. Other sound effects are also very well done. The graphics are pleasing to the eye. So it is recommended to all fans of role-playing games.
‹
›
Home
View web version