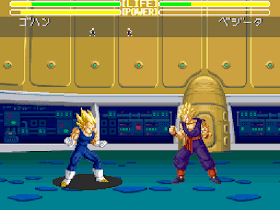 Genre: Action
Perspective: Side view
Visual: 2D scrolling
Art: Anime / Manga
Gameplay: Fighting
Narrative: Martial arts
Published by: Bandai Co.
Developed by: Tose Co.
Released: 1994
Platform: Super Nintendo (SNES)
The last part of the Super Butouden series. The game has good graphics plans, although they are not much improved compared to the previous game. The sound effects are good. Characters can still move away from the opponent for long distances, soar in the sky, etc. They use their hands and feet and their techniques to achieve victory. You can throw various fireballs, including super-powerful discharges. The animation of the characters is done at a high quality level. If you liked the previous games, you may find positive impressions from this third chapter. Overall, this is a very good series of fighting games. But maybe for someone she used her best ideas in the new part of Dragon Ball Z - Hyper Dimension.
‹
›
Home
View web version