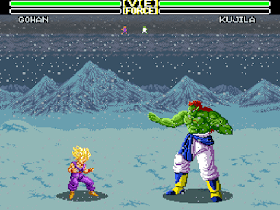 Genre: Action
Perspective: Side view
Visual: 2D scrolling
Art: Anime / Manga
Gameplay: Arcade, Fighting
Narrative: Martial arts
Published by: Bandai Co.
Developed by: d&d Corp., Tose Co.
Released: 1993
Platform: Super Nintendo (SNES)
Continuation of a series of fighting games in the universe of the popular anime. The fighting hasn't changed much. You can play the History Game or just test your strength in a duel with the computer or a second player. There are more characters than in the first game of the Super Butouden series, each of them is unique in its own way. The graphics have become better, the sound effects have not undergone major changes. However, it's still fun and enjoyable to play, and in general we can say that this part is a worthy representative of the fighting game genre, as well as the whole series.
‹
›
Home
View web version