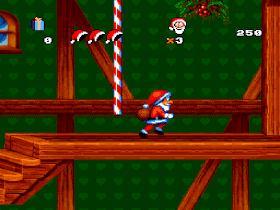 Genre: Action
Perspective: Side view
Visual: 2D scrolling
Gameplay: Platform, Shooter
Published by: Sun Corporation
Developed by: Funcom Productions A/S
Released: 1994
Platforms: Super Nintendo (SNES), SEGA Genesis / Mega Drive
A game about the adventures of Santa Claus. As you know, its main task is to deliver gifts to homes on the eve of Christmas. However, various monsters decided to prevent this. And Santa Claus goes to punish them. He uses magic to turn enemies into gifts, which he collects in his backpack, as well as picking up things along the way. The game is well designed and easy to play.
‹
›
Home
View web version