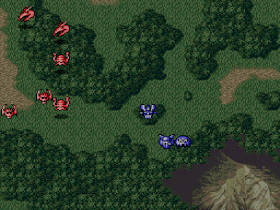 Genre: Strategy
Perspective: Top-down
Art: Anime / Manga
Pacing: Turn-based
Gameplay: Tactical RPG, Turn-based strategy
Vehicular: Mecha / giant robot
Setting: Sci-fi / futuristic
Narrative: War
Published by: Banpresto Co.
Developed by: Winky Soft Co.
Released: 1995
Platform: Super Nintendo (SNES)
Here is the greatest installment in Banpresto's Super Robot series. This game gives you the opportunity to create your own character. You can edit his name, blood type, personality and more. As before, it is necessary to move around the playing field and, if possible, attack the enemy. The game has excellent soundtracks, and in general, sound effects are pleasing. Another story of the war between the inhabitants of the earth and the inhabitants of space. You and your team are once again trying to stop this bloodshed. Your task is to find allies and unite into a strong army against a powerful enemy. The game has two endings, so once you've completed it, you can start over. There are many branches of the plot and you will have to choose a further destination. Each route has its own advantages and disadvantages. A very significant part in the history of Super Robot. Recommended to all fans of this series.
‹
›
Home
View web version