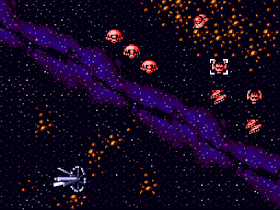 Genre: Role-playing (RPG), Strategy
Perspective: Top-down
Art: Anime / Manga
Pacing: Turn-based
Vehicular: Mecha / giant robot
Setting: Sci-fi / futuristic
Published by: Banpresto Co.
Developed by: Winky Soft Co.
Released: 1993
Platform: Super Nintendo (SNES)
All fans of anime, fans of the Super Robot series, and indeed games with giant MECHA are recommended. This phenomenal game is worth your time! In the previous game, the antipode Bian Zoldark forms a hostile faction of Divine Crusaders who were trying to conquer humanity. In the final battle with our heroes, he died without fulfilling his plans. This time, the Divine Crusaders are back, this time under the control of the Zabi family. Now they will intrigue the whole world through militarized giant machines. The story is just brilliant. Throughout the game, the direction of the plot may change slightly. The amount of detail in the design of the robots is quite worthy, some of the attacks look simply impressive. Sound effects are good. This series subsequently appeared not only on SNES, but also on other systems and remains popular with many real tacticians and strategists.
‹
›
Home
View web version