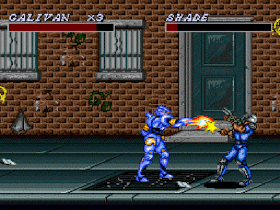 Genre: Action
Perspective: Side view
Visual: 2D scrolling
Gameplay: Arcade, Beat 'em up / brawler
Setting: Sci-fi / futuristic
Published by: Nihon Bussan Co.
Developed by: Cream
Released: 1993
Platform: Super Nintendo (SNES)
Cosmo Police Galivan 2: Arrow of Justice - mid-level Beat 'em up. a very interesting character who knows how to increase and modify his body parts, something like Battletoads. Other characters also have some kind of set of strokes, but the game is too boring, and the music is designed in a characteristic style, which does not captivate at all and does not give motivation for its further passage. So it's best to take a look at the other variety of Beat-Em-Ups on the Super Nintendo.
‹
›
Home
View web version