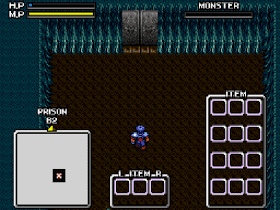 Genre: Action, Role-playing (RPG)
Perspective: Top-down
Setting: Fantasy
Published by: KOEI Co.
Developed by: Nihon Falcom Corp.
Released: 1995
Platform: Super Nintendo (SNES)
Continuation of one of the most non-standard RPG. Many considered her very peculiar and unique, so there were many fans. Now we have the second part, which has become even more interesting and improved in technical terms. The sprites are very well rendered, and there are some pretty decent animations. Some areas have interesting views and unique terrain, so now the dark gloomy dungeon will not seem boring and gray to you. The music in this game is also all right. Varik is captured and thrown into prison, now you will again have to make your way to freedom. Now there is a wide variety of various locations. If you loved the first Brandish, you will love the second part as well. If you did not understand the first game, then you are unlikely to understand the continuation. But the game deserves to be played.
‹
›
Home
View web version